What is a Cole Crop?

Cole crops are vegetables in the Brassica (bràs-si-ca) family; which includes cabbage, brussels sprouts, kohlrabi, cauliflower and broccoli. The term cole crops can be confusing. Cole crops prefer cool weather, but cole actually refers to the Latin word, caulis, meaning stem or cabbage – and not to temperature. Cole crops are high in vitamin C and soluble fiber; and, when eaten raw or steamed, they contain anti-cancer properties

When should cole crop be planted?

Cole crop grow best in cool weather and should be planted earlier that warm season vegetables like tomatoes and peppers. In Minnesota, this would generally be from late April to mid-May, around the same time that seed potatoes and onion sets are planted.

How are cole crops grown?

The best soil for cole crops is well-drained and fertile. Cole crops prefer full sun, but if you have a corner of the garden that gets shade part of the day, save the full sun are for your warm season crops.

Plants in the Brassica family are native to Europe, the Mediterranean, and temperate regions of Asia.

While growing, these vegetable should be watered once a week so that the soil is moist to a depth of 1”. Weeds should be roved when they are small to avoid damaging the shallow roots of the cole crops.

Cole crops can be damaged by cabbage worms or cabbage loopers, which chew holes in the leaves. Although a small amount of caterpillar damage to the leaves won’t affect the crop, these pests should be removed before they cause significant damage. There are a few options for dealing with caterpillars. When plants are small, caterpillars can be picked off by hand and dropped into a pail of soapy water. When plants are larger they can be treated with Bt (Bacillius thuringiensis), a biological insecticide that only affects caterpillars. Products that contain Permethrin (Eight) or Carbaryl (Sevin) can be used, but will also kill the natural enemies of the caterpillars and should be used cautiously. Read the instructions

The French use a term of endearment, “mon chou” or “mon petit chou”, equivalent to “darling” but translated literally as “my little cabbage” in school French textbooks since the late 1950s. – Wikipedia

Broccoli
Broccoli should be harvested before the flower buds open. Once the center head of broccoli is harvested, the plant may still continue to produce heads on side shoots.

Cauliflower
For white cauliflower, the outer leaves should be tied loosely around the head when it first becomes visible. Like broccoli, cauliflower should be harvested before the flower buds open.

Brussels Sprouts
When the lowest head on the stalk reaches the size of a quarter, the growing point on the top of the stalk should be pinched off. This will help all the sprouts ripen uniformly. When the sprouts are one to two inches in diameter, they can be removed from the stalk.

Cabbage
Cabbage can be harvested when the head feels solid and is of a useable size. Use a sharp knife to remove the cabbage head from the base of the plant. The heads may split if the plants are heavily water while developing.

Kohlrabi
Kohlrabi can be harvested when the above ground bulb is two to three inches in diameter. The bulb will become tough

Heat oven to 425°F
Prepare brussels sprouts by slicing off the ends and cutting in half horizontally.
Remove any loose or discolored outer leaves.
Place on backing sheet and toss with olive oil.
Season with salt and pepper to taste.
Bake for 12-17 minutes until browned around the edges. Let cool slightly before eating. 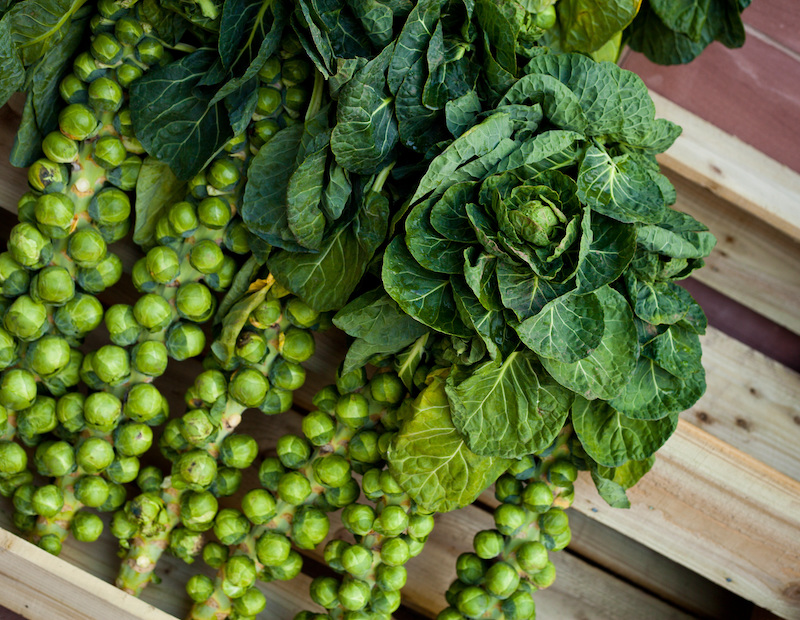 Why do my tomatoes have a black spot on the bottom?